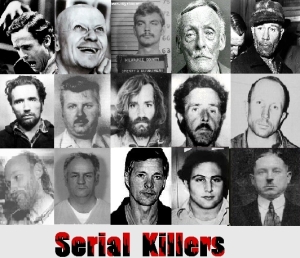 I’ve received the most interest and visits from my blog article on 13 Interesting Serial Killer Facts that was first posted last year and then again last month.  An interesting fact that many people forget about is that the United States isn’t the only country in the world with prolific, hideous serial killers.  In fact, the top ten list of countries shows that the U.S. is ranked #10 by victims.

However, law enforcement and historians estimate some of these serial killer victims, which may not be one hundred percent accurate due to a variety of circumstances.  It gives an interesting facet to the phenomenon of serial crime and a strong foundation for debate and conversation.

What can we learn from these cases?  Are there any psychological triggers, indicators, chemical, environmental or biological clues to these senseless killings?

Garavito was called the child murderer, torture killer, and rapist known as “The Beast”.  He was convicted of 30 murders, which was later reduced to 22 for his in aiding investigators.

Lopez was convicted of killing 110 young girls, but confessed to killing 300.  He was known as the “Monster of the Andes”.

This is a very interesting case.  Dyer was only convicted of only one murder.  After her death, it was confirmed that she killed 274 babies, which were recovered from the River Thames.  She was dubbed the “Baby Farm Murderess”.

Shipman was known as “Doctor Death”.  He was convicted of 15 murders and responsible for the deaths of 218 patients.  He would inject diamorphone into his patients, falsify medical records, and report the patient was in poor health.

Bathory was known as the “Blood Countess” or “Blood Queen”.  It is not known actually how many people she killed.  There is even some speculation that she was possibly the victim of conspiracy and may have been innocent.

Saltykova was a noblewoman show was found guilty of 38 murders.

Thug was a cult leader and confessed to killing more than 125 victims and present during 931 murders by his cult.  He was never convicted of any of the murders.  There was speculation that he was responsible for 50,000 to 1,000,000 murders.

Ishikawa was a nurse and euthanized more than 103 newborn babies to parents unwilling to care for them during prohibition of abortion in Japan.  She was sentenced to 4 years in prison.

Iqbal was a child murderer and confessed to killing 100 children.  He was convicted on all counts.  He was later found dead in his prison cell, possibly tortured and murdered, but ruled a suicide.

This case has been called the United States most prolific serial killer, also known as the Green River Killer.  He mostly targeted prostitues from the Seattle area.  After strangling his victims, he would then dump the body near the water.  He was convicted of 49 murders, confessed to 71 murders and was suspected of more than 90.