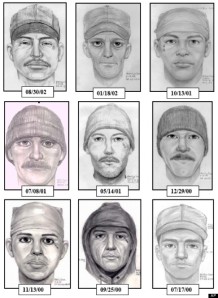 Have you ever wondered about the accuracy of an eyewitness sketch?  Someone who has never seen the perpetrator sits down with a piece of charcoal and says, “OK, tell me what he looked like.”  Not only are you dealing with the artist’s interpretation of a description, but when you bring in multiple witnesses who each may have seen things differently, the idea that the criminal is going to come face-to-face with one of these sketches and think he is looking in a mirror is unlikely.

Of course, that’s not to say the sketches created in police stations are not valuable and that they haven’t been essential in leading to the capture of numerous rapists, robbers, and murderers.  But, take a look at a recent blog post published by Dr. Karen Franklin over at her site that focuses on issues of forensic psychology and criminology.

In the post, Dr. Franklin shares multiple images of sketches taken of the “Teardrop Rapist,” who is believed to be responsible for nearly thirty rapes in the East Los Angeles area over the past sixteen years, over the course of about twenty-four months.  The face shape and facial features vary widely, as do the number and placement of the teardrop tattoos, and the height and weight that is provided next to the picture.  Just check out the latest release from the Los Angeles Police Department . . . “They think he is between 5-feet-2 inches and 6 feet tall and weighs between 130 and 200 pounds.”

Wanting an accurate representation of this rapist has taken on renewed interest as the DNA from this wanted man has recently been linked to another rape after a five-year hiatus of no reported incidents.  This leads investigators to believe they may need to be comparing their sketches to men who recently ended a five-year stint in prison.

Check out the blog post on Dr. Franklin’s site.  It’s just another eye opener into the amazing job that our men and women in uniform do even when the evidence is subject to the human eye and its errors.