Posted on September 5, 2012 by jchasenovelist 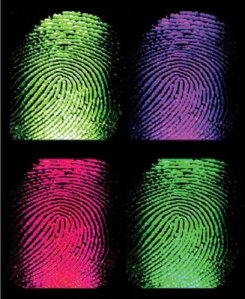 Consuming processed foods on a regular basis has contributed to a higher level of salt excreted through fingerprints.  Many processed and junk foods possess a high level of sodium (generally used as a perseverative), which in turn allows fingerprints to become more visible on metal surfaces leaving behind a corrosive chemistry, even after the print has been wiped away.

“This would be particularly helpful for terrorist type crimes where the nature of the incident would tend to obliterate forensic evidence.  So a sweat mark on a piece of metal or bomb fragment that might be recovered from an incident might be able to provide a clue to the type of person who perpetuated the incident.”

Dr. John Bond, a researcher at the University of Leicester and scientific support officer at Northamptonshire Police, has invented a new forensic fingerprinting technique by claiming that criminals who eat processed foods are more likely to be discovered by police through their fingerprint sweat.  The fingerprint substance left corrodes the metal leaving a visible print behind.  In simplest terms, the higher salt intake the better the corrosion on the metal.

At a conference for forensic sciences, Dr. Bond explained that a sweaty fingerprint left at a crime scene could be analyzed for a specific “sweat profile” about the type of person who left the evidence.

“We would describe the study of sweat as a process of intelligent fingerprinting – using the fingerprint to tell us more about the individual rather than the simple identification.”

There are many advances being theorized, studied and applied into the world of forensic science to help solve more cases.  This is especially imperative for serial and cold cases.  Anything that would expedite the investigation process to identify the perpetrator(s) is a win-win situation for everyone involved.

Criminals can leave fingerprint evidence on such metal surfaces such as soda cans, bullets, guns, appliances, technology devices, bomb fragments, assorted hardware, and weapons.  Further research is being conducted into this forensic procedure and it will be interesting to find out what happens with Dr. Bond’s fingerprinting technique in the near future.