Posted on September 20, 2012 by jchasenovelist 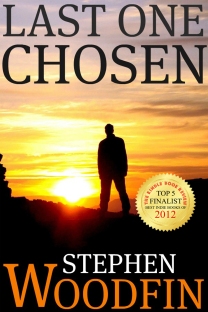 It’s that day again — Thriller Thursday!  I’m pleased to introduce a very talented author Stephen Woodfin with his exciting thriller Last One Chosen.  Let us now take a look inside a high-octane thriller and see how good versus evil pans out.

Homeland Security agents raid a small East Texas town and arrest a humble blue-collar worker for domestic terrorism and espionage. When two country lawyers take on his defense and fight to prevent their client’s execution, they learn that he holds the secret of a doomsday device, a secret he will not divulge, even under torture. At the trial’s astonishing conclusion, they realize for the first time that their struggle was not only about justice, but also redemption.

LAST ONE CHOSEN chronicles what can happen when one person motivated purely by the desire to do good for his fellow human beings is willing to give his life to oppose the forces of evil.

Jennifer Chase: If your main character was trapped in an elevator with three other people, how would your hero devise a plan to escape? Would they take any of the people with them?

Stephen Woodfin: He’s an air conditioning and heating repair man as well as a brilliant scientist. So he would improvise a chute made of the prisoners’ clothing.  Anyone who was too good to strip to save his fellow elevator detainees would have to remain behind.

Jennifer chase: How do you get inside your main character’s head when writing?

Stephen Woodfin: This is a tough one because it is just a matter of feel for me.  I have a conception of the things that make a character tick, the things that are inviolate for him or her.  I try to put the character in an impossible situation where he has never been and let him work his way out. It is usually as much of a surprise for me as it is for the reader.  So, I suppose I go at from the perspective of what I know she won’t do and then let her figure out what she will do.

Jennifer Chase: What’s your specific genre? If you could write in any other genre, what would it be and why?

Stephen Woodfin: Legal thrillers.  These come naturally for me because I have spent twenty-five years trying cases in the courtroom.  Recently, I took a break from it and, on a dare wrote a 5,000 word satirical, fictional memoir about a lawyer turned vampire who faced a moral dilemma when he became a born-again Christian.  I had more fun writing that than anything I have done in a while.  However, the title has yet to catch on:  God’s Love Sucks:  A Brief Memoir of a Born-Again Vampire.

Jennifer Chase: So why should readers pick up Last One Chosen?

Stephen Woodfin: Because it is a fun read that also carries a powerful message about how we should treat each other.  The characters are the sort of people no one expects to be heroic, who nevertheless show how the power of love and loyalty can conquer anything.

Jennifer Chase: What types of emotions will readers experience when they read your book?

Stephen Woodfin: I hope they laugh and cry and get mad.  Most of the reviewers expressed that they found it exciting, but also heart-warming. Although it has tragic elements, in essence it is about friendship and the human values that drive us to help each other and to sacrifice to do the right thing.  It is also a cautionary tale about the brute power of government and how it attempts to crush anyone who gets in its way.

Thank you so much Stephen!  I appreciate you dropping by today to chat about Last One Chosen.  Congratulations on being a Finalist for Best 2012 Mystery/Thriller at The Kindle Book Review!

Stephen Woodfin holds a BA in religion from Dallas Baptist University, graduating magna cum laude in 1974, as well as a Master of Divinity Degree from Southeastern Baptist Theological Seminary in Wake Forest, NC (1979) where he received the Cullen Midler Theology Award for the best paper submitted in Systematic Theology. In 1985, he graduated from Baylor Law School with a JD and gained admittance to the State Bar of Texas. He has practiced law for the last twenty-six years. He often tells juries that he went to seminary to get the Lord on his side and to law school to get the Devil on his side.

Woodfin has appeared as a featured speaker at state and national legal seminars, authoring papers for these appearances and for the Texas Paralegal Journal.  His presentation at the American Bar Association Annual Seminar on Class Actions was one of the highest ranked of the seminar.

In 2008, Woodfin’s courtroom short story, The Promiscuity Defense, appeared in the Northeast Texas Writers’ Organization (NETWO) Anthology.  Also in 2008, Writer’s Digest published his story, He Ain’t Leaving; He’s Gone, in its 2008 Short Short Story Collection. The story, which features a protagonist suffering from Alzheimer’s disease, ranked 15th out of over 7,000 submissions.

Woodfin is the author of five legal thrillers, a collection of short stories and standalone satirical five thousand word piece about a lawyer turned vampire who faces an ethical dilemma when he becomes a born-again Christian.