Posted on October 16, 2010 by jchasenovelist 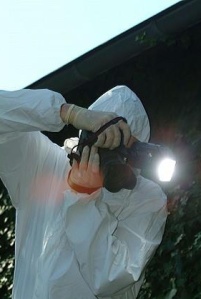 To detect bloodstains at a crime scene, forensic technicians use a chemical called luminol.  It is sprayed around the crime scene and reacts to the iron in blood, emitting a bluish glow in the dark.  However, luminol is toxic, can smear blood patterns, and can react to other substances (rust, coffee, fizzy or carbonated drinks, bleach) to give a false positive.

There are many types of advances and technology being tested every day in a variety of fields.  I enjoy finding little tidbits of forensic information to share, especially if it’s something to help solve more cases or shed more light on a case.

A prototype camera developed by Stephen Morgan and Michael Myrick from the University of South Carolina in Columbia can detect bloodstains invisible to the naked eye.  In addition, this camera can distinguish between blood and other substances without interfering with the samples.

The camera takes an image of a crime scene by using beams of pulsing infrared light onto a surface that then detects the infrared reflected back off it.  A transparent, 8 micrometer-thick layer of protein albumin placed in front of the detector acts a s a filter, which makes a diluted blood stain show up against the crime scene surroundings by filtering out wavelengths that aren’t characteristic of blood proteins.

This new camera would help to expedite crime scene processing for blood stains and not contaminate any critical evidence in the process.  It would immediately tell a story of what happened during a crime.