One of Time Magazine’s Best Inventions in 2008 – Enhanced Fingerprints

Posted on February 22, 2011 by jchasenovelist 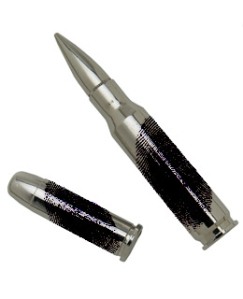 There are so many really cool things that make Time Magazine’s top 50 inventions every year.  For example in 2010, there was the solar shingle, bladeless fan, wooden bones, and the world’s fastest (steam powered) car.

An amazing fingerprint enhancement technique was listed in Time Magazine’s Top 50 Best Inventions for 2008.  A physicist, John Bond, developed a new technique for analyzing fingerprints on a gun after they have been wiped clean.  Basically, sweat corrodes metal, so Bond was able to apply an electrical charge and a fine carbon powder to a gun’s corroded part, and revealed a fingerprint pattern.  Now you see it!  Police have already been using this technology to reopen some of their unsolved cases.

Fingerprints are one of the most crucial pieces of evidence in crime scene investigations.  And, they are the most fragile piece of evidence.  They can be easily contaminated or destroyed due to many reasons.  In the crime scene investigator’s handbook, it is highly recommended any potential fingerprints be searched, documented, and collected first.

As with any new technology, it seems that there are more than one purpose for inventive ingenuity.  This new fingerprint enhancement also works by way of measuring the extent of corrosion on copper and copper-based alloys.  Basically, discovering how much metal has corroded.  This is a cheap, easy process (works off a 9 volt battery in the field) to measure corrosion on machinery making sure that there aren’t any safety issues.  It can be used for measuring corrosion on water pipes, various machinery piping, and anything that has copper pieces.

John Bond’s new fingerprint enhancement has been sited as one of the technologies “most likely to change the world” by a penal of experts for BBC Focus Magazine.  That’s quite an impressive statement.  Here again, forensic technology has been used for other important tasks.