Life of a Military Combat Tracker

Posted on April 8, 2011 by jchasenovelist 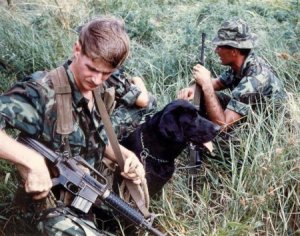 I’m amazed by the stories of dogs in the military, even today.  The combat tracker teams in Vietnam inspired me to write a prologue in my newest thriller, Silent Partner.   The book is about a modern day police K9 officer who tracks down a serial killer.  I wanted to begin the book with one of the supporting characters back in Vietnam and the feeling of what it was like for combat trackers.

An “actual” Vietnam combat tracker, Ed Wheeler and his four-legged tracker Sam, who just happens to be a black Labrador retriever, has graciously lent me the photo for this article.  This photo was taken just after they landed by helicopter in Vietnam.  Thank you Ed!

The rain stopped abruptly on the thirty-sixth consecutive day of torrential downpours.  An intense humidity reeked from the undergrowth of the dense, twisted jungle foliage and saturated earth.

Sticky uniforms clung to the bodies of the weary soldiers and it reflected a constant reminder of the unbearable weather. Fond memories of living at home in the United States kept them company on their forward journey.

Each difficult breath compressed heavily inward.  Exhalation helped to alleviate some of the anxiety and fatigue.

The U.S. Army Platoon of the 26th Infantry found themselves deep inside the harsh world of Vietnam fighting a war they didn’t completely understand.  Many of the men, barely eighteen years old, had lived at home with their parents.  Drafted from small towns in places like Iowa, Delaware, and Georgia.  They hiked with a moderate amount of stealth through the wild, overgrown vegetation.

Carrying his military weapon, poised, and eyeing every possible moving shadow around him that might resemble the enemy, Alec Weaver walked his point position as a combat tracker that assisted the platoon.  His nineteenth birthday neared, almost two weeks away.

The soldiers hunted rogue, enemy assassins.  It wasn’t the choice spot for anyone in the military, but Alec thrived on it.  His eyes dropped downward, the strength and skill of his teammate instilled security.

A regal German shepherd dutifully guided the men with his ears perked and alert, head low, with keen canine senses picking up everything around them as he led.  A thick tail fell against a lean ninety-five pound body, an unwavering navigation system.  The mugginess didn’t bother him in the least as it did most of the men.  Oblivious to the discomforts of the jungle, he had a job to do and did it well.

Alec’s combat tracking squad consisted of five men, including himself as the dog handler.

Butch reigned as the leader and had most of the combat experience in the group.  Only two years older, it made a significant difference in battle maneuvers.  From a tiny town in Indiana, one that most had never heard of in casual conversation, had unknowingly thrust Butch into the middle of a complicated war.

Tom acted as coverman with a clear-cut expertise in weapons.  He never wasted any words, but always had your back.

Brett controlled the intense and essential job of visual tracker.  Always the jokester of the group, he gave the entire platoon some much-needed comic relief from time to time.

Terry manned the RTO, radio-telephone operator.  The most educated member with three semesters of college under his belt, and yet he was the most conservative of the group.  He aspired to become a lawyer and if he survived the war, there’s no doubt that he would succeed.

Alec had spent several months training with Max in obedience class and then went on to the combat tracker dog handler course.  Hand picked from a list of volunteers, he soon graduated with a sharp set of tracking skills…