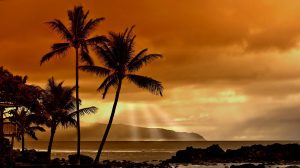 When I first began writing crime thrillers and my first book Compulsion, I didn’t immediately envision a series.  I was so involved in the story initially and it was a therapy of sorts from my horrible experiences with a sociopathic neighbor that I didn’t think very far ahead.  Then, the Emily Stone Thriller Series actually took on a life of its own.  Each story seems to be falling into place for the crime-fighting, vigilante heroine.  There are many more storylines in the works!

My latest book, Dark Mind, was so much fun during the research phase.  I wanted to create a serial killer that had a flavor of the islands with a believable past and experiences, so I researched the history of Kauai and even read some of the Hawaiian folklore passed down through generations.  It was fascinating because there was so much great information to inspire me.  I could have spent an extra month just learning more about the Hawaiian Islands, but I had enough information to help elevate the murder mystery.

I visited Kauai on a few occasions and it made a lasting impression with the views, smells, waves, sunsets, and even the remote locations.  During my last trip a few years ago, I sat on this gorgeous deserted beach and began to think about the storyline to Dark Mind.

As I began writing and weaving my criminology expertise into the storyline, I realized that it needed just a bit of the Hawaiian language for realism.  Not too much to bore my readers where you would need an English/Hawaiian dictionary, but just enough to add a “real” sense of the island and culture.  I know that I was going out on limb but I incorporated a few real words and phrases to the novel.  I felt it was worth the risk and it wouldn’t take away from the reading enjoyment.

With a few Hawaiian words, I added a brief dictionary and correct pronunciation preview at the beginning of Dark Mind for readers.

Readers come to know the serial killer in Dark Mind as Keo, until his true identity is revealed.  You won’t find any spoilers here!  Keo is from the Hawaiian word Keolo’ewa.  According to folklore, he was a god of sorcerers, black magic and was said to possess people.

Have you ever had to research another culture or a different language?

“This is a terrific read from start to finish. The writing is impeccable and the story is fresh and tight. Emily stone is fragile and tough. She displays a vulnerability most protagonists aren’t allowed to expose. It’s nice to read a story which doesn’t follow a formula.” ~ Best Selling Author Gary Ponzo


“Dark Mind is written with a sharp attention to detail and a commanding knowledge that Jennifer Chase lends to the readability and believability of this book. The suspense is never ending and the unfolding mystery will keep you totally engaged.”  ~ Kindle Book Review

“Very well written with lots of cliff hangers to keep me turning the pages! It takes a certain talent to be able to write like that.”  ~ V.L., Forensic Manager