Posted on February 18, 2013 by jchasenovelist 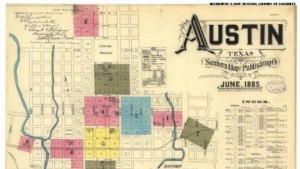 The idea of police detectives mulling over evidence from twenty or thirty years ago in hopes of finding some new lead or piece of evidence, however small or seemingly trivial, fascinates us.  Most of us love a good mystery, so much so that there was an entire long-running television show built on this premise.  But, what if the unsolved case was not just a generation or two back, but more than a century past?  The term “cold case” does not seem to do it justice.  At that point, it’s more like an archeological effort.

Texas filmmaker Martin Wagner is hoping to discover new information about the murders of eight servant girls in Austin, Texas between New Year’s Eve 1884 and Christmas Eve 1885.  These girls were pulled from their sleeping quarters and stabbed with an ax or knife.  More than 400 men were arrested over the course of 1885, with elected officials refusing to believe that one man or even one group of men could have created so much carnage.  None of these arrests led to a conviction related to any of the murders.

Could this have been the work of a 19th century serial killer whose identity may be revealed with tools that were not as our disposal in the 1880s?  When Jack the Ripper rose to infamy several years after the “Servant Girl Annihilator” (a nickname given to the unknown killer by the writer O’Henry, who was living in the area at the time of the crimes) some researchers tried to connect the dots between victims and methodology.  Perhaps this link needs another look?

Many questions need to be answered and studied as to motive, opportunity, signature, victimology, autopsy report (if there was one), forensic evidence (if any), additional crime scenes, and behavioral evidence based on location of the bodies.

What a fascinating story on many levels –a cold case involving multiple victims, possible connections to a known serial killer, even the tangential involvement of a beloved American writer.  When Wagner completes his documentary, Bloody Work: The Unsolved Mystery of the Servant Girl Annihilator, on these killings, I will be watching.

Previous posts about serial killers that might interest you:

Serial Killer was Addicted to Pleasure of Hunting and Killing