Criminal Psychology and The Grinch

Posted on December 17, 2013 by jchasenovelist 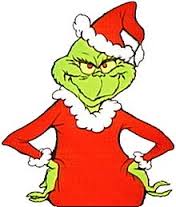 The Grinch. A criminal who tried to destroy a town but instead found rehabilitation and a chance to choose a different life path. With my interest in criminal psychology and Christmas just about a week away, I thought I would have a little fun and take a look at this character. Can we figure out what made him want to commit these acts against his neighbors? Can we peek inside the mind of the Grinch?

Now, the Grinch certainly is not as evil as some of the villains I have crafted for my novels, who rape and murder and terrify entire communities with their acts. But, the text shows he is guilty of breaking and entering, identity theft and burglary among other acts. Not petty charges, to be sure, and laid out wonderfully in this attorney’s blog post.

Dr. Seuss does not offer us much insight into the Grinch’s hatred of all things Christmas, just that he does not care for the singing and the laughter and the noise. OK, but perhaps a simple call to local law enforcement to lodge a noise complaint would have been sufficient for this grouchy neighbor. Jim Carrey’s interpretation on film gives us more of a backstory, showing the Grinch as a child who was teased and excluded by his peers due to his looks. So, as we see so often in patterns of crime, the bullied becomes the bully.

On Christmas Eve, the Grinch illegally enters multiple homes and steals presents, decorated evergreens and even food out of the refrigerator. Even the questioning of an innocent young girl who does not yet realize the potential for bad in people deters his actions. It is only upon realizing that his crimes did not have their intended effect that he decides to abandon his quick foray into the world of crime altogether.

The Grinch’s story is not an unusual one. He is an individual who doesn’t fit in, who lives on the fringes. He is unhappy, and wants others to share in his misery because it hurts too much to feel it alone. But in the real world of crime, not just on the pages of a beloved kids’ book, how often does the criminal have an awakening in which he decides to turn his life around? Sometimes, sure. But wouldn’t it be nice if even more of those who operate on the wrong side of the law would have such a moment?

1 Response to Criminal Psychology and The Grinch