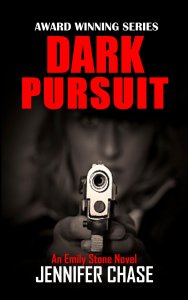 By Bella Wright for Best Thrillers

Can a notorious serial killer be stopped before his next victim is executed?

That’s the challenge facing detective Emily Stone, the heroine of author Jennifer Chase’s eponymously named series. Emily hunts down serial killers for a living, but she’s never seen a case quite like the one portrayed in Dark Pursuit.

Her adversary has become known in local media as the Tick-Tock Killer, so named for his four-day kill cycle. Emily, who is an expert profiler, is searching for a narcissist who loves the notoriety that his work has brought him. The victims are young girls between six and twelve years old. They are smart and popular, from good families, with above average intelligence. While the killer has a consistent profile, the way he disposes of the bodies is another matter. According to Emily’s theory, he working on a rating system, which lower-ranked girls dumped in a grave, and higher-ranked girls are put on display.

Chase’s writing is particularly good when her heroine is making deductions based on new data that factors into the killer’s profile.

The Tick-Tock Killer isn’t Emily’s only challenge. She also faces gender discrimination from a powerful deputy won’t hesitate to use violence to push Emily out of her profession. Fortunately, Emily’s partner and lover, retired police officer Rick Lopez, has her back.

Dark Pursuit races right out of the gate (with an chill-inducing pursuit on a creepy dark road) and never lets up until the final play is made. Thankfully for Chase’s new fans, readers can jump into Dark Pursuit even if they haven’t yet read previous books in the series.

So what are you waiting for? Tick-tock…