Posted on March 1, 2018 by jchasenovelist

Throughout civilized history, it has been vital for society to maintain some semblance of order with respect to crime. And, although, in ancient times, there existed no official, organized police function, people still managed to keep crime somewhat under control.

In those ancient societies, revenge was essentially the only form of law enforcement. The concepts of deterrence and crime prevention were not yet in existence, and such notions were not implemented for a couple millennia.

Here’s a brief overview of the evolution of policing.

As stated above, there was no official law enforcement in ancient societies. If a crime occurred, the victim would seek revenge against the perpetrator. Depending on the severity of the offense, and the region of the world, the retribution would come from either the individual, family or the clan. Regardless of who sought revenge, leniency was rare, and punishment was often severe.

Once societies became more organized and developed, there was a need for a more unified approach to law enforcement. And the most logical entity to fill that vacuum was the military. Already equipped with weapons and trained to battle, soldiers were essentially the most qualified individuals to enforce the law.

During the Roman Empire, centurions would seize law breakers, and patrol the streets. The mere presence of the soldiers led to a primitive form of crime prevention. The contemporary notion of deterrence is a result of more modern theories of criminology, which occurred much later in western civilization.

After the collapse of the centralized Roman Empire, Western society once again became more provincial. As a result, responsibility for enforcing laws and maintaining order reverted to back to local authorities.

During this transitional period, it was an individual’s duty to protect themselves and their property. Under British law, people were granted authority to use force so that they may exercise this right. In addition to protecting yourself, it was expected that neighbors and family members would lend a hand. This was known as “kin policing.”

This clan mentality was a throwback to ancient times. And often, these blood feuds would lead to the decimation of entire families.

As society emerged from the Dark Ages, and into the Middle Ages, urbanization grew, and it became apparent that a new form of organized social order was required. This new system of control put communities in charge, as opposed to individuals and families.

One such method of community policing was known as frankpledge. Under this system, all males over the age of 12 were required to form groups of ten individuals, known as a tything. These groups were charged with detaining any person guilty of a criminal offense. Each tythingman took an oath to protect his fellow citizens, and such duty was obligatory and unpaid.

To increase the effectiveness of order and control, individual tything’s were brought together to form teams of one hundred men, who were under the supervision of the local constable. Although modern policing was still centuries away, the constable was the first notion of a police officer, in that he was a person specifically assigned the full-time task of maintaining law and order.

The groundwork for the hierarchy of a modern police department was laid out during this period with the establishment of the shire reeve (sheriff). The shire reeve was appointed by the King and was charged with managing all the constables in the region, or shire. 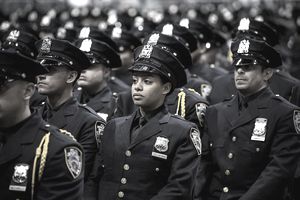 Eventually, the frankpledge system collapsed due to regional disputes and lack of oversight by the monarch. In its stead, the parish constable system was implemented. Males in each parish (or village) were given a 1-year stint as a constable.

As part of their duties, parish constables had to appoint night watchmen, who were beckoned to the call of duty at moments’ notice in case of a crime or emergency. The watchmen would be obligated to remain “on duty” until the criminal was apprehended, or the emergency was resolved.

Justices of the Peace

The parish constable system was later enhanced with justices of the peace, who were appointed by the monarch to aid the shire reeves by issuing warrants, trying cases and sentencing guilty parties.

This form of law enforcement served small communities into, and throughout, the 19th Century. But, large cities began utilizing a different form of law enforcement beginning in the late 18th Century. And this can be attributed to the population explosion that occurred throughout the Western world, most notably in the United States and Great Britain.

The Genesis of Modern Law Enforcement

Once the population explosion occurred, leading to the urbanization of the West, there was a great deal of civil unrest. At that point, it became apparent that there needed to be professional, uniformed police forces that acted under the government’s official authority.

Society’s modernization coincided with the emergence of criminology. Those involved in that field, along with philosophers and sociologists, called upon officials to institute a centralized police force, whose primary roles were to maintain order and protect the populace.

There was a great deal of resistance among the masses when the idea of a centralized police force was introduced. The prevailing fear was that the police would become an extension of the military and serve as an occupying force.

Many of the fears were quelled after English Parliament Minister Sir Robert Peele formed the first modern police department—London’s Metropolitan Police Services. The “Bobbies” as they are still called were named after Peele, and their actions of instituting order and preventing crime eventually became a welcome addition to the dangerous city of London.

Some of the methods used by Peele to distinguish between the police and military, and to assuage the fears of the citizenry was to give the police a different color uniform, and to not provide guns to the Bobbies.

The principles instituted by Peele found their way to the United States, and across the globe. Peele’s philosophy combined with the long, storied evolution of policing has led to today’s modern police departments.

4 Responses to Social Order: The Historical Evolution of Policing