From the Archives of Serial Killers… Innocent Victims 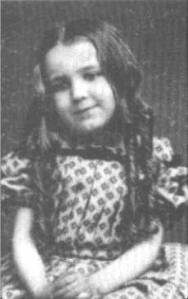 From the personal diary of convicted killer Frederick Baker on August 26, 1867, “Killed a young girl.  It was fine and hot.”

As I’ve been reading through true crime books and looking up serial cases for research, both for my novels and articles on criminology, I’ve found that there have been some hideous cases in the 1800s.  Many times we forget that serial killers have been around as long as there have been people.

In my Emily Stone Series, she takes her anonymous job seriously and hunts down child abductors and serial killers with a vengeance.  Her hope is to find the child alive and be able to return them to their families, but that isn’t always the case.  I couldn’t help but think of Emily Stone when I read about a particular case in 1867.

It was a summer afternoon in Alton, Hampshire when seven-year-old Fanny Adams, her sister and friend decided to go outside and play.  Frederick Baker, a twenty-nine year old solicitor’s clerk, met up with the girls and gave them candy and three half pence to run races with him.  He then took Fanny Adams into the hop fields.

Baker then proceeded to murder and mutilate the little girl.  When family and neighbors later found Fanny Adams, her bloody head had been stuck on a hop-pole with eyes gouged out and one ear torn off.  Her chest had been severed at the diaphragm with the heart scooped out.  It was beyond gruesome by any standards.

According to accounts of the investigation, it appeared that Fanny was battered in the head with a stone and then cut apart with a small pen knife.  Baker was arrested and still had blood on his shirt and trousers that he couldn’t explain.  He protested his innocence throughout the trial.  However, later he did write a letter to the family to express his sorrow for what he had done “in an unguarded hour” and was seeking their forgiveness.

A jury found Frederick Baker guilty of willful murder in only fifteen minutes.  On December 24, 1867, Baker was hanged.

I can’t help but speculate that this was a psychopathic fantasy for Frederick Baker and wonder how long he lived the gruesome events in his mind before he acted upon them.  He worked as a solicitor’s clerk, but we will never know what horrific thoughts went through his mind until that fateful day on his tea break that he decided to take young Fanny Adam’s life.

Were there any warning signs?  Did he exhibit any outcast type of behavior or aggressiveness?  What was his family life like growing up?  What did “unguarded hour” mean?  What if they didn’t catch him for Fanny Adam’s murder?  Would he have gone a rampage?