What Advice Would Police Woman Give Emily Stone Today?

Posted on November 16, 2011 by jchasenovelist 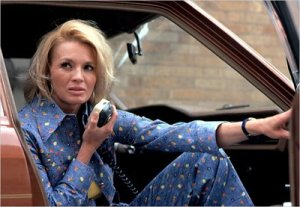 She was an undercover cop in the Criminal Conspiracy Unit of the LAPD (no such unit as far as I know) busting rapists, murderers, and drug dealers.

The cop drama Police Woman starred Angie Dickinson as Sergeant Pepper Anderson and was considered to be the first successful television series with a female police officer that ran for four seasons from 1974 to 1978.  The first season it aired, it hit number “1” in the ratings.

Police Woman was actually a spin off series from Police Story.  It also paved the way for more female driven television shows, The Bionic Woman, Wonder Woman, Charlie’s Angels, and one of my police show archive favorites Cagney & Lacy.

As a response from the show Police Woman, it was reported that there was a dramatic increase in applications for employment from women all across the U.S. to police departments.

It was also reported that in 1976 President Gerald Ford rescheduled a Tuesday press conference in order to watch his favorite television show, Police Woman.  I’m not sure what to make of that statement, but obviously the president loved beautiful, gun toting police sergeants with low cut necklines.

Interestingly, I found there to be a few similarities between my heroine Emily Stone and Sgt. Pepper Anderson.

First, they are both blonde.  However, Emily is not the peroxide blonde bombshell with perfectly coiffed hair, but she’s a blonde nonetheless.

Second, they both walk that thin line of working undercover (or anonymously in Emily’s case) in dangerous crime situations to get the bad guys off the streets.  This is what drives both of their characters.

Finally, they both have male partners that watch their backs.

If Pepper had any advice to give to Emily, I think that it would be for her to with her gut instincts and don’t let anyone tell her that she can’t do something, just because she’s a woman.  That’s just my take on the conversation between these two strong female leading characters.

Check out my Emily Stone Series and see what you think?

1 Response to What Advice Would Police Woman Give Emily Stone Today?