Can You Tell a Lie and Not Get Caught? 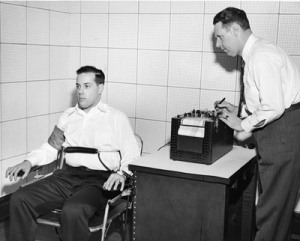 Years ago, I had an interview with a police department for a forensic position.  I had already been fingerprinted, interviewed by the supervisor, had an in-depth background meeting with the background investigators trying to catch me in a lie from my thirty plus page application of my background, and the investigator even visited my home.  I still wasn’t done with the interview process yet!  The final phase of the interview was the infamous lie detector test.

I’m a fairly easy-going, straight to the point kind of person with nothing to hide, but I have to admit I was a little intimidated by the thought that my stress might make the lie detector test blip a bit.  Maybe make me look guilty for something I did or didn’t do.  Was that possible?

I met with a patrol sergeant who was certified in administering the lie detector test to police department applicants.  I was escorted into a small interrogation room.  We are talking no thrills, small metal table, two uncomfortable chairs, and a rudimentary sign on the wall that read: check your firearm before entering.  Yeah, it was one of those rooms where the cops questioned suspects with hardcore investigative techniques.  My writer’s brain went through all types of wild scenarios, and I wondered if they had questioned a murder suspect in the very chair I was seated. Now I was sweating and fidgeting.  I expected to be wired up with numerous plastic suction cups with a strap across my chest as shown on television, but instead, my lie detector test was one tiny clip with a microphone affixed to my shirt.  The one cord was linked via USB connection to a laptop computer as the sergeant watched the modest size screen.  It was a voice stress analyzer that would detect any inconsistencies (or stress) from my voice.

And so it began… I kept thinking that my voice sounded funny, almost hollow, as I answered the routine questions.  It was like someone else was talking, but it was most likely my perception inside my head along with my nerves.

Once the interview was over, I asked half-jokingly “So did I pass?”

The polite cop answered, “I just have a question that I need verified from someone else.”

I just stared at him.  Was he kidding?

To make a long story short, I passed all of the tests and was offered a position.

So what the heck is the standard lie detector test?

It’s actually called a polygraph, which is administered by a certified polygraph examiner.  A polygraph is basically a combination of medical devices that are used to monitor changes occurring in the body.  As a person is questioned about a certain event or incident, the examiner looks to see how the person’s heart rate, blood pressure, respiratory rate and electro-dermal activity (sweatiness) change in comparison to normal levels. Fluctuations may indicate that person is being deceptive, but exam results are open to interpretation (if the subject is deceptive) by the examiner. ­

This is where the whole polygraph thing gets interesting.  The questions, answers, and responses are all subjective to the “interpretation” of the examiner.  It leaves room for some seriously grey areas in my opinion.

Can people really beat the polygraph?

According to Russell Tice, the National Security Agency whistleblower who blew the lid open on warrantless wiretapping conducted by the federal government on U.S. citizens post-9/11, says a person can trick the tester on “probable-lie” questions.

These are the basic questions that the examiner gives to the recipient before the process actually begins, like “have you ever stolen money” or “have you ever cheated on a test”, etc.

Tice goes on to explain, “to trick the tester, a person should lie in response to these questions like most other people would, but also bite their tongue hard while doing so, which will set off other physiological reactions in the body. The tester’s “needles will fly everywhere,” says Tice, “and he will think, ‘This guy is a nervous nelly. He has a strong physical reaction when he’s lying.'”

If these types of individuals don’t see anything wrong with lying in the first place and have no bodily changes in the process, then this test would deem inaccurate and at the very least highly incomplete.

How accurate is the lie detector?

Some interesting new research published in May of 2013 from an international team of psychologists has shown that people can actually suppress incriminating memories.  What happens when certain individuals do this is that they avoid detection in the brain activity with guilt detection tests.  It sounds simple enough, but it’s based on the logic that criminals have specific memories of their crime stored in their brain.  Once the criminal is confronted or reminded of these details, then the brain will automatically recognize these details and the bodily changes occur.

Contrary to this assumption, some individuals can intentionally suppress unwanted memories.  It wasn’t clear from the article if psychopathy was studied as well, but I would guess that sociopathic and psychopathic individuals would/could be a part of this memory suppressor group.

Dr. Jon Simons, of the Department of Psychology at the University of Cambridge stated, “Our findings would suggest that the use of most brain activity guilt detection tests in legal settings could be of limited value. Of course, there could be situations where it is impossible to beat a memory detection test, and we are not saying that all tests are flawed, just that the tests are not necessarily as good as some people claim. More research is also needed to understand whether the results of this research work in real life crime detection.”

Fun Fact:   The polygraph was invented in 1921 by John Augustus Larson, a medical student at the University of California at Berkeley and a police officer of the Berkeley Police Department in Berkeley, California. According to Encyclopedia Britannica, the polygraph was on its 2003 list of greatest inventions, described by the company as inventions that “have had profound effects on human life for better or worse.”

2 Responses to Can You Tell a Lie and Not Get Caught?