Posted on October 24, 2013 by jchasenovelist 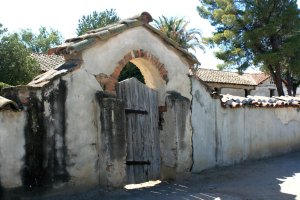 Curiosity persuaded me.  Inquisitiveness overpowered me.  These feelings called out, or rather screamed out, to my writer’s imagination.  I just had to stop and take some photographs of this particular spot at San Miguel Mission, which gave me the opportunity to enjoy one of my favorite activities as a shutterbug.  I find that photography compliments my writing skills to a degree because I have to concentrate on what is in the frame.  It simplifies a story in my mind and sometimes it adds to a narrative that I’m mulling over.  That little piece of information or added depth from research can push any storyline forward.

Travelling toward Southern California, I would see this intriguing location many times zooming by on the freeway. 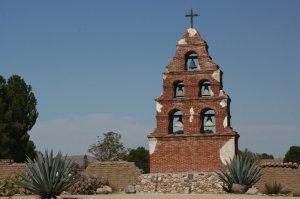 In fact, California is known for the many historical missions scattered throughout the landscapes.  San Miguel Mission has quite a history and has been quoted as one of California’s most haunted locations.  Paranormal enthusiasts and ghost “type” hunters have investigated this location and claimed that it is indeed haunted.

Tiles and adobe blocks were made and stored for 10 years before the stone foundation of the church was laid in 1816.  On July 4, 1846, Petronillo Rios and William Reed took possession of the mission Buildings and the Reed family occupied the recently abandoned mission. Following the murder of 11 Reed family members and household staff, the mission rooms were converted to commercial stores such as, a hotel, saloon, and retail shops.

It has been said that the ghost of Mrs. Reed has been seen roaming the grounds looking for her children, and she is mad.  Not only does this site have some unexplained hauntings, strange lights, and sounds, but there is also the story of buried gold.  Makes one wonder?  It has all of the elements of a mystery thriller with murder, greed, buried treasure, and ghosts.

I took a walk around the exterior grounds first to try to gain some perspective.  I love to photograph gates and parts of the adobe structure.

In the back of my mind, I imagined a story about all of the people who had visited the mission and how it must have looked two hundred years ago.  The courtyard was beautiful.  Every entrance and gate had the amazing architecture of the old adobes, which reeked of history.  I then meandered around, walked through the church, and then ended up in the graveyard near the bell tower.

I took many photos and read several of the old gravestones, but what piqued my interest was the walkway up to the tower.  I’m not sure why, but I had to see more.  The stones carefully assembled were remarkable – at least to me. 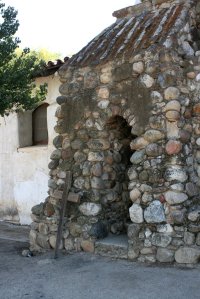 I took a couple of steps and peered up toward the bells.  The staircase was blocked off by an iron gate, but I could see a glimpse of the sky (see photos below of me and the view up the staircase).  I imagined what it must have been like in the 1800s to climb to the top and ring the bells.

I spoke with a few visitors and told them that they could see up the stone staircase, but no one would dare to ascend the few steps in order to take a look.  Perhaps it was too scary?  Maybe this was an area where Mrs. Reed would appear?  Maybe they knew something that I didn’t know?  Nonetheless, I approach interesting locations with the same tenacity as my heroine Emily Stone.  I enjoyed my visit to the San Miguel Mission.  It inspired me for upcoming stories.  I highly recommend visiting historical or even haunted locations to recharge your writing skills.  You never know where it might take you. 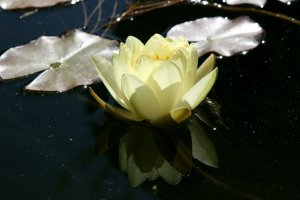 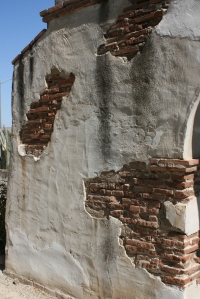 I would love to hear about some of the historical or haunted locations you’ve visited.