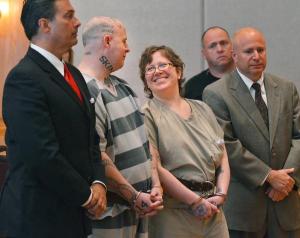 I have spent years developing a series of novels around a woman, Emily Stone, who takes matters into her own hands to rid her community of pedophiles and murderers. She uses technology and weapons and simple instinct to bring these criminals to justice with all of the evidence the police need to finish the effort. So, I can see the noble purpose in wanting to engage in vigilante justice, however ill-advised without the proper training. When the people who have decided to take on such a task appear to be rather despicable individuals themselves, however, the sense of justice becomes murkier.

Jeremy and Christine Moody were sentenced last week to life for the murder of Charles Parker and his wife Gretchen. Charles was a convicted sexual offender, including a 1991 assault on a child and a 2003 third-degree criminal misconduct against a woman, but had no known previous encounters with the Moodys.

The Moodys entered the home of the Parkers under false pretenses and then proceeded to stab and shoot both of them. The couple was caught on surveillance video and quickly found due to “white power” and “skinhead” tattoos on Jeremy’s face. Prior to their sentencing, the Moodys claimed to regret their crimes and spoke of their histories of mental problems and sexual abuse. They were hoping for a sentence of thirty years, allowing them to grow old together and be with their children at some point again. Once they learned that life behind bars would be their fate, their demeanor completely changed. As they exited the courtroom, the Moodys yelled that killing the Parkers made for a great day and they would kill more pedophiles if given the chance.

So, we are left with two people dead, one who previously exacted horror on his own victims and the other guilty by marriage, and two admitted white supremacists who will live out their days in prison. While anger against sexual predators is understandable, making the decision to rid the world of them is not an appropriate response. Allow the justice system to work, help where you can, and speak up when you think a wrong has been done. Let the vigilante efforts stop there.

What are your thoughts on vigilante justice?

“Fast paced, leave no stone unturned and the story is equivalent to the caliber of Vince Flynn reads. “

“Author Jennifer Chase knocks the ball right out of the park with this story. Reminiscent of Daniel Silva reads the author creates a powerful story that twists and turns – keeping me white knuckled more than once.”

“I really enjoyed this book. It has all the ingredients of a good suspense, mystery story, and it’s well written. “