Posted on October 26, 2014 by jchasenovelist 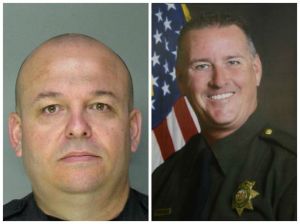 As part of my academic studies and in doing research for my novels, I have had the tremendous honor of spending a lot of time with the men and women who protect our communities as members of law enforcement. I have trained with them, watched them diffuse potentially violent situations, and been inspired by how they care about every individual they have sworn to protect. Therefore, like many of you, I am heartbroken over the senseless murders of two police officers in my state of California.

Sacramento County Deputy Danny Oliver approached a vehicle parked at a Motel 6 to investigate the appearance of suspicious behavior. Before he could even get close to the car, he was shot dead by an AR-15 that was pointed out one of the car’s windows. Oliver’s partner attempted to stop the vehicle, but the two suspects instead got away.

Over the next few hours, the two people later identified as Marcelo Marquez and Jennelle Manroy carjacked or attempted to carjack several different vehicles and took off on the interstate. They were met again by officers while pulled over on the side of the road in Placer County, again with devastating results. This time, Detective Michael Davis was killed when he walked toward the vehicle, having recognized the description from reports that were now on the radar of every officer in the area. Manroy was arrested near the scene, but Marquez would not be captured until later in the afternoon after being discovered inside a home in a residential area.

Oliver leaves behind a wife and two kids, Davis a wife and four kids. And, in a tragic coincidence, Davis was killed in the line of duty twenty-six years later to the day that his father gave his life in the same way. This is a family that has sacrificed over generations for the cause of our safety.

My thoughts and prayers are with both families. This is a reminder to me to be even more grateful for our officers, who face grave risks every day they leave for work but so do willingly and with great skill and courage.