Gunshot Residue: Now You See it Now You Don’t

Posted on January 30, 2016 by jchasenovelist 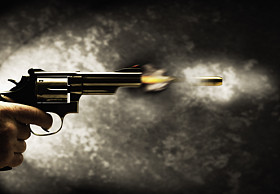 Gunshot residue or GSR is an important component to any homicide crime scene involving the discharge of a firearm.  It tells a story.  The big question is how accurate is the story and is it retold correctly.  As they say, some evidence may not be what it seems.

The best place to start is at the beginning of course.

First, a little background on GSR.  What exactly is it?  GSR is categorized as trace evidence and it is made up of the compounds lead, barium, and antimony.  When someone fires a gun these particles are the residue produced from the components in the primer of the gun cartridge.

Picture this: When you fire a gun, think of the residue escaping into a puff cloud around the shooter and anything close to them, which settles in small particles on anything in the vicinity.  How large the area for GSR would depend upon how far the gun is from the person shooting the weapon and the velocity of the size of bullet.

Lead, barium and antimony can be found in some types of brake linings.

When someone pulls the trigger the GSR evidence transfers to their hands and can transfer to the surrounding vicinity.  Think about it, if the weapon discharges inside a house (for example), the particles can transfer to clothes, furniture, walls, surfaces, the victim, and a whole host of other household items in the vicinity.  These areas are important to investigators and crime scene professionals to determine where the perpetrator and victim were located when the gun was fired.  It may seem like an obvious connection at the crime scene, but there can be many variables of the actual event.

Take for example, the shooter wore gloves and left the crime scene.  Another person arrives (or was with the shooter) and touches various items in the house that had GSR.  The transfer of evidence would be on the non-shooters hands and/or clothes.

Another example is a suicide, in this case the trace evidence can be transferred to other surfaces.  This further indicates that reconstructing the crime scene is an absolute in any homicide.

After 6-8 hours, forensics analysts would not expect to detect GSR on an active person with a moderate amount of hand washing.

The crime lab GSR analysis instruments have a detection limit. Issues such as GSR particle quantity and size can render a positive reading below a detectable level. Also keep in mind, that just because there is GSR located on an object or person, it’s ultimately in the interpretation on how it was deposited that tells story of the crime.

This was a statement from a State Crime Laboratory Division:

“Based on the experience of the forensic community, between 10-20% of suicide GSR kits test negative for GSR. Additionally, our experience demonstrates that homicide or assault victims shot by someone else can test positive for GSR. One test, for example, demonstrated that GSR can travel in the direction of the bullet as far as 18 feet. Finding GSR on a shooting victim’s hands does not differentiate between a self-inflicted wound or a homicide. Likewise, a negative GSR result from a suspected suicide does not mean that someone else fired the weapon.”

The forensic scientist in the trace evidence section of a crime lab analyzes the GSR evidence using a scanning electron microscope, and issues reports on the findings and testified in court.

The bottom line, the evidence initially may not always tell the correct story of the events, but it does tell the story.  It’s up to the investigator to put together all of the clues in the correct order.

2 Responses to Gunshot Residue: Now You See it Now You Don’t