Good Morning! It’s publication day–finally! I’m so very excited to announce that LITTLE GIRLS SLEEPING is now available in all formats. So grab your coffee, turn on all the lights, lock the doors, and jump into Detective Katie Scott’s investigation in Little Girls Sleeping. Think you can guess the killer? Try, I dare you.

Thank you to everyone at NetGalley and Goodreads for leaving feedback and reviews.

He looked down at the little girl, sleeping peacefully, her arms wrapped around a teddy bear. He knew he was the only one who could save her. He could let her sleep forever.

An eight-year-old girl, Chelsea Compton, is missing in Pine Valley, California and for Detective Katie Scott it’s a cruel reminder of the friend who disappeared from summer camp twenty years ago. Unable to shake the memories, Katie vows she won’t rest until she discovers what happened to Chelsea.

But as Katie starts to investigate, accompanied by her loyal ex-military dog, Cisco, the case reveals itself to be much bigger and more shocking than she feared. Hidden deep in the forest she unearths a makeshift cemetery: a row of graves, each with a brightly coloured teddy bear.

Katie links the graves to a stack of missing-persons cases involving young girls—finding a pattern no one else has managed to see. Someone in Pine Valley has been taking the town’s daughters for years, and Katie is the only one who can stop them.

And then another little girl goes missing, snatched from the park near her home.

Katie’s still haunted by the friend she failed to protect, and she’ll do anything to stop the killer striking again—but can she find the little girl before it’s too late?

Compulsive and gripping crime fiction for fans of Lisa Regan, Rachel Caine and Melinda Leigh. Katie Scott’s first case will have you on the edge of your seat and gasping with shock.

What readers are saying about Little Girls Sleeping:

‘Believe me when I say that you are in for a thrilling read!… I could not put it away. Can highly recommend!’ Goodreads Reviewer, 5 stars

‘Really wowed by it… I couldn’t put the book down and was trying to read as fast as I could so I could find out who the killer was. The ending took me by surprise… I was literally gasping for air.’ Goodreads reviewer, 5 stars

‘Wow!… The hairs on my head stood up with this one!’ Goodreads reviewer, 5 stars

‘A nail-biting thriller… I was gripped from page one, through each twist and turn… until I reached the climax which was shocking and totally unexpected.’ Netgalley reviewer, 5 stars

‘It was addicting, captivating and had me reading into the night.’ Goodreads reviewer, 5 stars

‘A chilling read with plenty of twists the whole way through! Cannot wait for the second book.’ Goodreads reviewer

‘Truly an amazing book. The storyline flowed, the characters were engaging, and I could barely tear myself away… Highly recommended!’ Goodreads reviewer, 5 stars

‘I read it in one sitting and could not put it down. A real page turner. I really enjoyed her writing and the scenery just came to live. I would have no hesitation in recommending this book.’ Goodreads reviewer, 5 stars 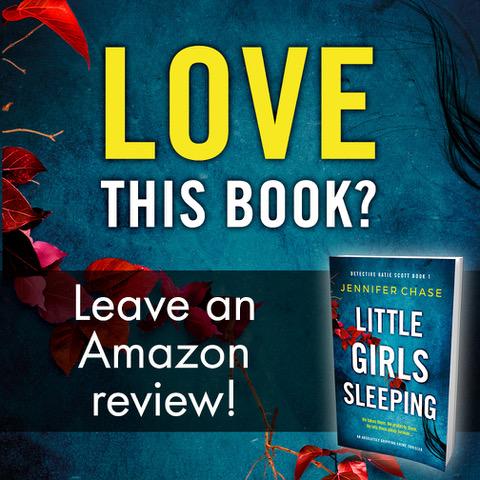