Trapped by a Serial Killer in DEAD BURN Sneak Peek

Posted on February 3, 2013 by jchasenovelist

He made his way around to the back of the building carefully examining each step.  A metal door caught his eye, which led directly to the alley and it appeared strangely out of place.  The doorknob glistened bright silver, sparkling clean, without smudges or fingerprints.  It imbibed the late sunlight and expelled a star shadow with long sliver points dispersed around the alley.

The entire door stood out against the run down building as if someone had just installed it.  There were no available windows, just more disintegrating pieces of plywood bolted into the building, layer after layer from the years of neglect.

Chad swallowed hard as his mouth went dry, he licked his lips in nervous tension.  He blinked his eyes several times to stop the slight dizziness that crept into his view making the door and the crumbling building vie for his attention.

He stared at the doorknob for what seemed like an hour, but in reality, barely five seconds had passed.  Finally, with his right hand he reached for the grip and twisted.  It turned easily in his grasp.  He let go and backed up two steps, still staring at the door.  Something deep inside told him to retrieve his .22 from his pocket.

It could be so easy to leave and return to his car, but an unseen force pushed him to move forward, if not for some great sex then at least out of fundamental curiosity.

Chad was out of his element and he liked the feeling of being in control of his destiny in a foreign setting and never knowing what would jump out at him.  The adrenaline surged through his veins, down his arms and legs, and pumped in an orchestras’ fashion.

Chad grabbed the door handle, turned it, and pushed the door inward.  A whoosh sound from the suction of the tight weather stripping around the door dulled the ordinary outdoor noises as a crazy heartbeat pounded in his ears.  He felt the small gun in his left hand, smooth, precise, which made him feel invincible like a superhero in an action movie.

The door automatically closed behind him with barely a sound. 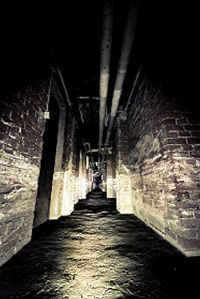 The long corridor was almost completely dark, but low lights appeared from the molding along the bottom of the walkway.  The windows were now part of the building and not even a crack of daylight shone through the nailed up boards.

He was surprised that his voice seemed weak and small.  He wasn’t expecting to play hide and seek in an old building and now his nerves transformed into fear.  He licked his dry lips again, moved his chalky tongue, and he realized that his palm left a sweaty residue wrapped around the small caliber pistol.

“Okay, you got me.”  He tried to sound casual.  “I followed the bread crumbs.”

Chad looked down and noticed that the floor looked clean; it was as if someone had meticulously swept it recently and he thought he could smell a hint of industrial floor polish.  Odd, he thought as he continued to move forward, deeper into the building.

The corridor led into another part of the building through a double wide doorway, which once housed a holding area for inventory merchandise as well as shipping and receiving.

The two heavy doors slammed shut with an incredible force that made Chad jump just as goose bumps instantly rose on the back of his neck and down his arms.  He quickly moved toward the closed doors, but there weren’t any door knobs or handles to open them.

“Okay, you can come out now.”  He didn’t care that his voice sounded scared.

Chad spun around, but there wasn’t anyone in the room with him.  The voice seemed to materialize from nowhere, and yet everywhere.

“Mr. Bradford, do you know why you’re here?”

“What is this?  Who are you?”  He kept turning slowly expecting to see someone enter, but no one did.

“You have sinned and now you must pay the price.”

“Open the doors now!”  He remembered that the gun was in his left hand, he pointed the firearm straight out in front of him and moved in jerky motions from corner to corner.

“That isn’t going to save you.”  The eerie voice narrated like a parent reprimanding a naughty child.

“Is this some kind of sick joke?”  Chad kept moving around the room even though there wasn’t anywhere to go.

The monotone inflection of the voice wormed inside Chad’s head and deep within his core.  He knew it was human, but he pictured a futuristic robot presiding over him with a final sentence command.

“I said, open the doors now!” The lawyer demanded.

“Do you know how ridiculous you look?  You’re weak and pathetic.  You had much more confidence spewing your lies in the courtroom.”

Chad could feel his heart pounding as he gasped for air.  It had been years since his panic attacks had surfaced due to work related stress, but now in the darkened room that familiar dread of anxiety eagerly crept back into his body.

Chad waved the gun from each dark corner and squeezed off two shots, which zinged around the room.  He realized that there were small speakers in each corner.  He aimed the gun and fired several more shots at the general areas, but only managed to hurt his eardrums with the booming echoes.

Chad dropped his empty gun on the floor.  “What do you want from me?  You want me to apologize for my job?  Is that it?”

“Your greed spreads more filth.  You covet, commit adultery, and most of all… you knowingly defend rapists and murders.  The guilty sickens and ultimately tears down society.”

“Oh, so I’m guilty.  Guess you just skipped over something called the constitution, due process, and innocent until proven guilty.”

“You have free will and you’ve chosen your sins… and now you’ve sealed your fate.”

“Hey, I’m talking to you!”  Chad kicked his gun and it slid across the floor to a couple of stacked boxes.  “Coward!”  He managed to say.  “Show yourself!”

In desperation, Chad tried to find a way out of the room.  He ran his fingers over the doors and down the walls.  There weren’t any gaps, cracks or hardware that would allow him to pry it open to escape.

Chad caught the distinct odor of smoke and spun around to face the boxes.  The cubed cartons began to burn.  A small flame ignited from each of them and cast a macabre light around the room.  He could see wires and small plastic boxes affixed to the two corners of the room along with what he counted to be six small speakers.

“Let me out of here!”  Chad beat his fists on the doors, but it barely made an audible sound.  The doors were steel reinforced.  He knew that the room was also sound proof.

Smoke filled the room and floated around effortlessly in ghostlike apparitions.

Chad coughed and gagged.  He dropped to the floor, slowly crawled to the corner, tried to breathe, gasping for air in between violent fits of coughing.  It took exactly three minutes for him to fade into unconsciousness and slump against the double doors.  He never heard or felt the explosion that obliterated the one room in the old hardware store.

The carefully orchestrated burn completed its job of tearing away bones of Chad Bradford’s body, including a quick decapitation that left charred human remains sprinkled in hideous chunks on the walls.  The fire had burned down to a smoldering, smoky remnant before the fire department arrived.

You can check out the Award Winning Emily Stone Series: