What Would You Write in Your Crime Scene Investigator’s Notebook?

Posted on December 9, 2013 by jchasenovelist 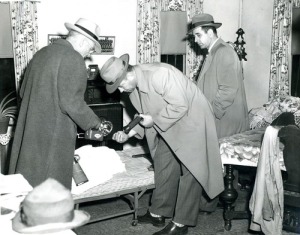 The job of a crime scene investigator isn’t glamorous or exotic as it is portrayed on popular television shows or even in the movies.  This daunting task is extremely important and necessary for any criminal police investigation in order to find out who committed the crime and to bring the perpetrator(s) to justice.

In my latest thriller DEAD BURN, Emily Stone tracks down serial killers and uses techniques of crime scene investigators in order to gather evidence anonymously for the police.  She uses procedures that many investigators use at homicide crime scenes and she is careful not to disturb potential evidence.  She takes identifying photos from various distances and searches potential crime scenes in a grid pattern.  You can discover how vigilante detective Emily Stone approaches a crime scene after the police have already conducted their investigation in Compulsion, Dead Game, and Dark Mind.

In real life, there are many different law enforcement personnel to help the investigator to determine what happened and who committed the act.

What are the main objectives of a crime scene investigation?

The actual examination of the crime scene is a thorough and exhaustive effort for the investigator.  There are many things that must be considered and the best way to proceed due to location, weather, type of evidence found, primary or secondary crime scene, body position, type of weapon used, exigent circumstances, personnel available, etc.

Generally, the investigator must begin to reevaluate the sequence of events, being careful not to miss anything in the initial search.  A systematic survey of the scene including the immediate surroundings, both indoors and outdoors should be implemented.  Absolutely everything should be written down and photographed as it’s discovered, along with a detailed diagram of the scene, which should be clear, concise, and meticulous.

If at all possible, using two crime scene investigators to examination a crime scene is the best and most effective technique.  The team should work in a cooperative manner together, not on separate tasks.  Two people can cover much more than just one person.  A common technique is that one investigator discovers aspects and clues about the scene and reports it to the other investigator to write down.  When the search is completed, the two investigators begin again, this time switching positions.  This system can be quite effective in not missing any key piece of evidence that will assist in solving the crime.

So, you think you could run a crime scene investigation?

Related blog posts that may interest you:

Crime Scene Characteristics – What do They Really Mean?

When is a Crime Scene Staged?

2 Responses to What Would You Write in Your Crime Scene Investigator’s Notebook?