Chip Palmer is Back in a New Book: SCENE OF THE CRIME #NewRelease #Mystery 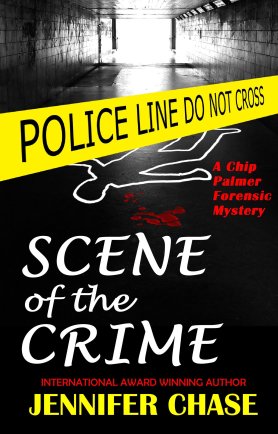 The second installment in the Award Winning Forensic Crime Series, SCENE OF THE CRIME, features the eccentric, reclusive criminalist and profiler Chip Palmer and Inspector Kate Rawlins together again. There is a killer on the loose and sparks are flying!

A calculating cold-blooded predator closes in…

When a community has barely recovered from a ruthless serial killer six months earlier; now two more horrifying murders hit the radar again. It leaves police burdened with two of the most shockingly contaminated crime scenes ever documented in California’s law enforcement history. The Slayer works behind the scenes as a sinister puppet master, precisely pulling the strings, taunting the police without leaving any viable evidence, and orchestrating his killer hit squads.

The sheriff and district attorney bring in the best investigators. Reunited again, Dr. Chip Palmer, a reclusive forensic expert, joins DA Inspector Kate Rawlins to sort through the crime scene aftermath in search of the truth—all without a probable suspect or a solid motive. Complicating the investigation—sparks reignite between the two.

Ratcheting up the suspense, Chip suffers a nasty fall hitting his head, impairing his perception and giving him a mind-blowing ability for specific detailed recall. Palmer and Rawlins assemble an unusual team including a rookie detective, a forensic supervisor, and an ex-military operative turned bodyguard. After one of their own is kidnapped and the investigation is taken over by the FBI, the now rogue team must pull together their own resources—alone—with a killer waiting to take each one of them out. SCENE OF THE CRIME takes no prisoners and leaves everyone fighting to stay alive.

Just $ 99 cents or available with KindleUnlimited

SCENE OF THE CRIME will be participating soon in a blog tour and there will be plenty of updates and fun things along the way. I would love to hear from you!

Published thriller author, criminologist, and blogger.
View all posts by jchasenovelist →
This entry was posted in scene of the crime and tagged Body of the Crime, chip palmer, cops, crime, forensic, jennifer chase author, murder, mystery, new release, scene of the crime, suspense. Bookmark the permalink.